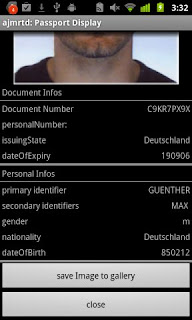 JMRTD, the Java library that I (together with others) maintain to access and interpret ePassport content, has been ported to Android by Max Günther. To demonstrate this, Max has developed an app (see the screenshot) for Nexus S (and other NFC Android handsets). We're not the first ePassport project on Android or NFC, but we try to be the most usable one!

The contactless technology in ePassports, ISO-14443, is fully compatible with NFC. Essentially this means that an NFC device in reader mode will be able to read ePassports. That is, of course, if the device has sufficient access privileges (i.e. Basic Access Control BAC, and Extended Access Control EAC). Max's app demonstrates how the essential passport holder details (aka datagroup 1) and the passport holder's facial image (aka datagroup 2) can be displayed.

The latter is actually non-trivial since that image is encoded in JPEG 2000 by some issuing countries, a format that is not supported in Android by default (thankfully there's jj2000). Another challenge that we encountered is the presence of a crippled version of Bouncy Castle in Android 2.3 which prevents inclusion of the full version (thankfully there's Spongy Castle). In general we've made many changes to JMRTD and SCUBA to make these libraries easier to port to other platforms.

We're working hard on making the app more robust and usable. Max and Claude Heyman are currently the main developers looking at Android NFC. We're trying to get MRZ OCR scanning to work (perhaps based on the Java OCR project). In its current form the app is not doing document validation or access to EAC protected data, but JMRTD allows this, in principle. We hope to publish the proof-of-concept app via the Android market soon. If you own a Nexus S (and an ePassport) we're definitely interested in your feedback.